ACCELERATE CALL FOR APPLICATIONS: THE ART OF THE SELF-TAPE 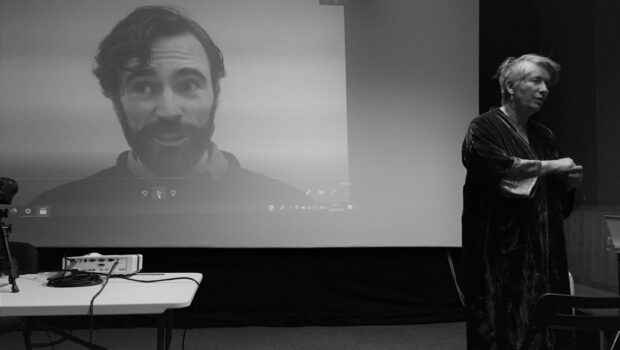 Irish Theatre Institute (ITI) invites applications from professional actors, who wish to participate in a 1-day workshop on The Art of the Self-tape, with Practical Application toward Zoom based audition technique led by Casting Director Maureen Hughes and Barry Coyle to take place on the 16th December.

Participants in this workshop can expect to learn new, and improve existing, techniques around the self-taping process with specific considerations for Zoom auditions. Actors will shoot one-to-one scenes with direction and critique, viewing their work onscreen together with evaluation and feedback. This is a professional training initiative, delivered as part of ITI’s Accelerate Programme, which provides career supports and training to practitioners at all stages of their careers.

• Participants must be practising professional actors for theatre and/or screen.

• Each individual must submit a CV, outlining their recent professional acting experience for theatre and/or screen with a cover letter answering the question “How do you think this self-taping training opportunity would benefit you and your practice?” (150 words max)

• Participants must be fully available to complete the one-day workshop on Wednesday 16th December 2020, 10.00am – 4pm.

• Applications will be assessed by ITI staff, with a view to selecting participants who satisfactorily meet the criteria set.

• Application is by open call to ensure fair selection and a diverse range of participants.

• A minimum of 12 places will be selected through this process.

Applications should be completed in full and sent by email to Leigh Hussey, Programme Co-ordinator, info@irishtheatreinstitute.ie by Thursday 10th December, 12pm (midday)

All applications will be acknowledged by email. If you apply and do not receive an email, please contact us to ensure your application has reached us safely.

Note: Successful applicants will need to submit a pre-recorded 3 minute self-tape of their choosing that they will work on for the workshop.

Maureen Hughes joined Druid Theatre Company in 1984 and spent three years working in Administration eventually moving into Casting for the company by 1987. In 1990, she joined the Abbey Theatre as Casting Director under the artistic directorship of Garry Hynes. In 1994, she moved to London to work on Neil Jordan’s film, The Butcher Boy with Susie Figgis. Following on that success, she was hired by Jim Sheridan to work on The Boxer with Daniel Day Lewis and Emily Watson.

Maureen has cast over numerous Irish features and dramas, with credits including ‘Once’, ‘Love/Hate’, ‘Acceptable Risk’, ‘Striking Out’, ‘Raw’ and the political biopic ‘Charlie’. Film credits include casting the Oscar winning short film Six Shooter by Martin McDonagh,  Paolo Sorrentino’s This Must Be The Place with Sean Penn, John Carney’s Once and It Is In Us All directed by Antonia Campbell Hughes and Doineann which is currently shooting in Belfast. Theatre credits include Casting Consultant with the Gate Theatre. Galway International Arts Festival (Incantata by Paul Muldoon), Landmark Productions (Once and currently Breakfast on Pluto with GIAF, Abbey Theatre (Raftery’s Hill, Drama at Inish) and Gaiety Theatre Productions (Cripple of Inis Meáin and Lieutenant of Inishmore).  Previous work with Druid includes Druidsynge, The Beauty Queen of Leenane, A Skull in Connemara and The Lonesome West.

In 2011 he left the Abbey Theatre to work as a freelance Casting Associate, going on to work alongside some of Ireland’s leading casting directors, such as Amy Rowan and Louise Kiely. In 2019 Barry began a close working relationship with Maureen Hughes, with whom he continues to co-cast on a wide range of projects, as well as taking on his own casting work independently.

Having worked for over a decade in the field of casting Barry has worked on everything from live theatre, to Netflix original series, as well as the occasional stadium-scale open casting, such as the Disney global search for the new Star Wars saga in Croke Park in 2013.

In 2020 Barry became a member of the Casting Directors Guild of the UK & Ireland.

Irish Theatre Institute is proudly funded by the Arts Council /An Chomhairle Ealaíon.