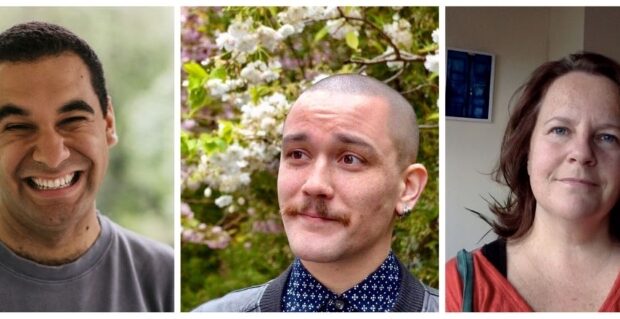 Irish Theatre Institute in association with CoisCéim Dance Theatre announces the artists participating in the Off-Site @ CoisCéim Residency 2022. The residences are short-term and will be in their inspiring new dance space at 42 Fairview Strand, Dublin 3. These residencies give theatre-makers, in particular those work may have some element of movement, the dedicated space and resources for physical expression and experimentation.

This offer went out to ITI’s Six in the Attic Alumni, as well as independent artists who had previously expressed a need for this type of residency. In 2023, we will extend this offer to the wider sector through an open call.

For the Residency, Colin will be working on re-imagining and redrafting of his play, Before You Head Off. It is a consideration of the bodies and voices of people of colour and how they often come into direct conflict with the Irish dramatic canon and its themes.

CN Smith is a playwright from Louth. He holds an MFA in Playwriting from the Lir Academy, and was a recipient of the Patricia Leggett Playwriting Scholarship in 2020. His play SPEAR is a Dublin Fringe Festival Commission for 2022, and he is also a part of Fishamble and The Irish Rep’s inaugural Trans-Atlantic Commissions.

For the Residency, Carys and MALAPROP will explore the concept for their next show – Ai Ya Ouch. They’ll work with a core cast of three actors and three dancers to explore pain- the most intimate of bodily experiences, the management of which is a pressing political issue.

Carys D. Coburn writes collaboratively with MALAPROP; their work has won acclaim for its distinctive blend of nerdiness and tenderness. Carys was the recipient of the 2017 Verity Bargate Award for their sole-authored play Citysong. Work with young people is a major strand of their practice; they are the author of ‘Ask Too Much of Me’, written for the 2018/19 NYT ensemble, and are currently under commission to write HandToMouthToMouthToHand for the National Theatre’s 2022 Connections programme.

For the Residency, Tracy will work with Red Bear on developing movement for a filmed version of the play Coast. They will workshop with actors on movement techniques which will blend together naturalistic movement, expressionist dance, parkour and martial arts.

Tracy Martin is a Writer and Artistic Director of Red Bear Productions. Red Bear are currently working on a slate of projects in association with Droichead Arts Centre; premiering her new play Once in a lifetime directed by Una McKevitt, filming her previous produced play Coast and an outreach programme. Her previous theatre works include directing and producing Neptune Calling, Dublin Will Show You How, (commissioned by the Abbey Theatre and the Complex Theatre, nominated for Best New Play in the Irish Times Theatre Awards), Coast (nominated for the 2016 Fishamble New Play Award and First Fortnight Award), Harder Faster More, Wrapped (nominated for the 2016 Stewart Parker Award). Following an IFTA nomination for her first short film Sister This, she is currently working with various production companies developing more work for screen.