ANNOUNCEMENT OF OFF-SITE AT COISCÉIM ARTISTS IN RESIDENCY 2018 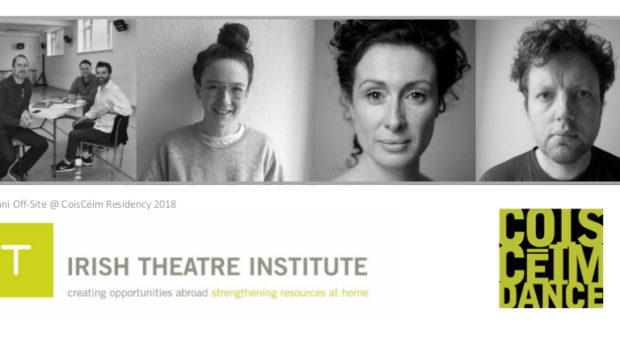 Designed to support and facilitate creative development opportunities for independent artists in Ireland, Six in the Attic Alumni Off-Site will facilitate four residencies during 2018. These short-term residencies are a resource sharing initiative to allow theatre makers, in particular those working through movement, a dedicated space and resources for physical expression and experimentation.

As part of the Off-Site @ CoisCéim residency, Shane together with Paul and Denis Clohessy will continue to develop the new musical There’s Gold in the Water. Over a three-day residency, the CoisCéim studio will be host to a team of musicians, singers and makers. This development is made possible by funding from an Arts Council Project Award with support from Irish Thetre Institute, The Ark and CoisCéim.

Zoe Ní Ríordáin is a theatre director and musician from Dublin. Along with collaborator Maud Lee, she makes original work for theatre based on deeply felt writing, expressed in layered theatrical language. Her current projects include; Everything I Do, which received a work-in-progress showing at Dublin Theatre Festival 2017, which she wrote and performed. She is also developing a new Irish language piece, Éist Liom (Listen to me) as part of the Pan Pan International Mentorship programme.

As a cellist, Zoe is a member of contemporary electro-pop band Maud in Cahoots. Zoe was selected as the director on the Rough Magic SEEDS programme 2014-2015. She is an associate artist of Project Arts Centre Dublin.

During the Off-Site @ CoisCéim residency Zoe will work on her new piece Everything I Do, in advance of its premiere in autumn 2018. The show is a solo music and movement piece based on co-dependency. It features original songs and choreography that she will devise with Aoife McAtamney. The team also includes Maud Lee and Gavin Quinn associate artists, and Simon Cullen (SHIPS band) as sound designer/co-composer. Zoe will use the space at CoisCéim to develop the movement language of the show, and work with producer Hugh Farrell on the production and logistics of the show.

An award-winning performer and writer, most recently Caitríona directed Mise Michéal for The Abbey Outreach Department, and her radio play, The Little Penpal, has been nominated for Best Writing and Best Narration in the NY Festivals World Awards 2018. Other radio plays include Eating Seals & Seagull’s Eggs and the award-winning Momento Mori and Agóid, a YTI/AXIS commission, premiered in 2017.

With her company Little Wolf, she created Goblom with choreographer Ella Clarke, The Autonomy Project/Limerick Fringe 18 and World Academy of Dance U.L. She played Tiger Fringe 2014 and Edinburgh Fringe 2015 with Eating Seals and Seagull’s Eggs to critical acclaim. Caitríona played the title role in Forever Yours Mary-Lou at the Ustinov, Theatre Royal Bath; the 10th anniversary celebration of The Oak Tree by Tim Crouch at The Traverse; Lippy, (Fringe First, Fringe Angel, Obie); Afterplay by Brian Friel, director Jason Byrne and Interloper with Liz Roche Company.

Caitríona was awarded an Arts Council development grant to create a new interdisciplinary work.  The piece is part elegy to the lighthouse, part ode to her grandfather, part inquiry into changing technology. Collaborating with Raymond Keane and Gina Moxley she has already workshopped the idea to explore a movement vocabulary and for this residency plans to further interrogate how movement can heighten baseline material.

Martin is a theatre maker, writer and director from Inis Oirr and based in Dublin.  He is interested in the sense of being within the construct and context of the theatre space. His most recent work was Playboyz(writer and director) which premiered at Dublin Theatre Festival 2017.

For this Off-Site @ CoisCeim residency Martin will explore how the movements triggered by Parkinsons might evolve as a potential dance piece. During this two weeks Martin wants to explore if involuntary movements can be legitimately construed as dance.