ANNOUNCEMENT OF OFF-SITE AT COISCÉIM RESIDENCIES 2019 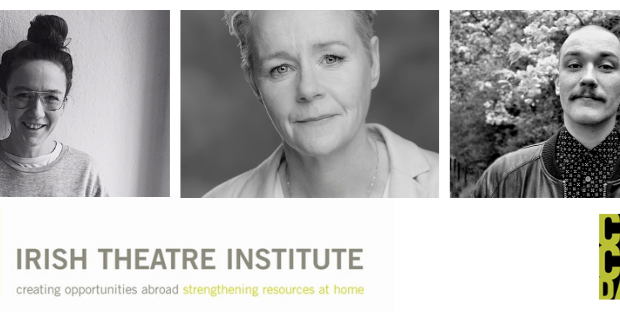 Irish Theatre Institute in association with CoisCéim Dance Theatre, announces the artists participating in the Alumni Off-Site @ CoisCéim Residency 2019. Designed to support and facilitate creative development opportunities for independent artists in Ireland, both partner organisations have come together to share resources to provide theatre makers, in particular those working through movement, dedicated space and resources for physical expression and experimentation. Since 2015, ITI has worked with CoisCéim in offering space to 11 Six in the Attic Alumni lead artists and theatre makers and their collaborators to rehearse and develop new work.

Zoe Ní Ríordáin is a theatre director and musician from Dublin. Along with collaborator Maud Lee, she makes original work for theatre based on deeply felt writing, expressed in layered theatrical language. Her current projects include; Everything I Do, premiered at Dublin Fringe Festival and will tour to Edinburgh Fringe in August, which she wrote and performed. She is also developing a new Irish language piece, Éist Liom (Listen to me) as part of the Pan Pan International Mentorship programme.

Zoe was selected as the director on the Rough Magic SEEDS programme 2014-2015. She is an associate artist of Project Arts Centre Dublin.

For the Off-Site @ CoisCéim residency Zoe will work with Director Maud Lee, to develop the movement language of Everything I Do, in advance of its tour in August 2019.

An actor since 1987, Noelle has worked extensively in theatre, film, television and radio.  Recent film and tv work include: The Green Knight and Fair City. She is currently appearing in The Unmanageable Sisters at the Abbey Theatre.

POSTSCRIPT, co-written with Michèle Forbes, premiered at Dublin Fringe Festival 2013 and was nominated for the Fishamble New Writing Award and the Bewleys Little Gem Award. It has toured Ireland and was presented at the Centre Cultural Irlandais in Paris. It also played at the Peacock Stage (Abbey Theatre) in 2017.

Foxy premiered at Project Cube (October 2015). Noelle wrote and co-created a movement documentary for theatre, with Oonagh Murphy called Creaking. It was presented as a staged reading at the Riverbank Arts Centre during the First Fortnight Festival and toured to seven venues as part of Bealtaine in May 2017. She was a writer on the 24 Hour plays and has worked on a movement memoir called Tender Courage with actor/performance artist Shane Byrne. She was delighted to be one of 30 playwrights chosen for the short list of Fishamble’s Play for Ireland initiative and co-wrote Octopus during this time with actor/writer Karen Cogan.

For the Off-Site @ CoisCéim residency Noelle will work on her new piece The Ship. Using movement and original music, the piece explores women’s lived experiences of menopause from the perspective of surgical and cancer treatment induced menopause and age-related menopause. The Ship will be presented as a 30-minute showing of work as part of the charity event night Menopause Unmasked at the Sugar Club in August 2019. Supported by funding from Dublin City Council Arts Office.

Dylan Coburn Gray is a playwright based in Dublin. His sole authored work includes Boys and Girls (winner of the Fishamble Best New Writing Award, nominated for the Stewart Parker Trust award) and Citysong (winner of Soho Theatre’s Verity Bargate Award 2017). Collaborative work with MALAPROP Theatre includes Love+ (winner of the Spirit of Fringe award 2015) and Everything Not Saved (winner of the Georganne Aldrich Heller Award 2017, The Guardian’s Best Shows of Edinburgh Fringe 2018). Both strands of his work play with form and aim to challenge and delight in equal measure.

For the Off-Site @ CoisCéim residency Dylan will work with MALAPROP Theatre on Hothouse, their commission for THISISPOPBABY’s 2020 Where We Live Festival. They will be using the week to explore ideas around home, legacy, and the irredeemable but weirdly beautiful tackiness of cruise ships, with an all-singing all-dancing ensemble of performers.