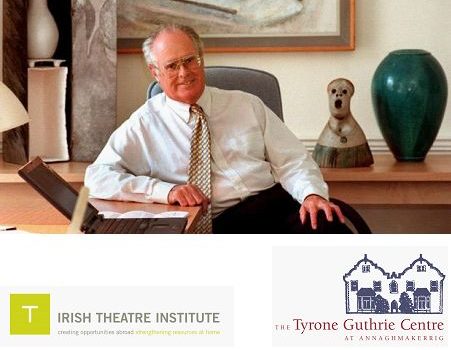 On Thursday 3rd December, Irish Theatre Institute (ITI) and the Tyrone Guthrie Centre, Annaghmakerrig will announce the recipient of the inaugural Phelim Donlon Playwright’s Bursary & Residency 2015/16. This award is named in honour of Phelim Donlon, former Drama Officer at the Arts Council and a dedicated member of the first Irish Theatre Institute PLAYOGRAPHYIreland Advisory Panel, in acknowledgement of his valued contribution to Irish theatre.  The award will be officially announced by Dr. Pat Donlon, former Director of National Library of Ireland and the Tyrone Guthrie Centre at Annaghmakerrig.

Open to playwrights resident in Ireland with at least one full length professionally produced play, the bursary will provide the recipient with the facilities and time to explore and develop new work for Irish theatre.  For this inaugural bursary, Irish Theatre Institute has partnered with colleagues at the Tyrone Guthrie Centre to offer a two weeks’ fully resourced residency in Annaghmakerrig, Co Monaghan and an ITI writer’s stipend.  The successful recipient will be announced at the celebratory event to take place at Irish Theatre Institute with family, friends and former colleagues of Phelim Donlon in attendance.

Irish Theatre Institute promotes the Irish theatre repertoire through its comprehensive online databases Irish Playography and Playography na Gaeilge. The Phelim Donlon Playwright’s Bursary & Residency is an example of how ITI supports the development and work of Irish playwrights via strategic partnerships and through the organisation’s events.