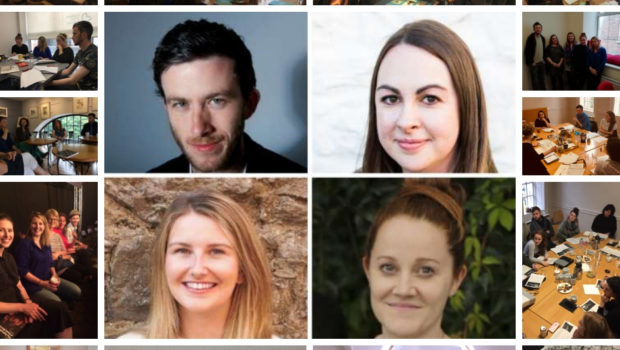 ELEVATOR 2018 emerging producers have had a busy five months. The four Galway-based participants (Féilim O’hAoláin, Jill Murray, Kate Murphy and Síomha Nee), have taken part in a programme of professional development sessions, mentoring, peer learning and have attended festivals and performances in Ireland and the UK. These sessions are held monthly in Dublin or Galway and have included meetings with producers and industry experts and bespoke workshops.

• Meet the Producers: Matthew Smyth (Collapsing Horse/ANU    Productions) and Michelle Cahill (ELEVATOR alumnus) to hear about producing with a theatre company and freelance

• Meeting with Rachel West, Head of Theatre, Arts Council to hear about funding awards and supports for the sector offered by the Arts Council

• Meet the Producers: David Horan and Iseult Golden to hear about producing and touring Class

• Performance of Shelter by Cristín Kehoe, produced by Druid in the Mick Lally Theatre

• Performance of Furniture by Sonya Kelly, produced by Druid in the Mick Lally Theatre

• Performance of The Aspirations of Daisy Morrow, by Chris Drummond, adapted from the short story “Down at the Dump” by Patrick White, produced by Brink Productions, in the Black Box Theatre

• Performance of FRNKNSTN by Michael West, produced by Theatre Lovett in the Peacock stage at the Abbey Theatre

• Performance of The Snapper by Roddy Doyle at the Gate Theatre

• Pitching in action II: Things We Haven’t Made Yet, a pitching session where Irish artists introduced upcoming projects with an eye to securing development and project/touring partners.

• Performance of Madhouse by Úna McKevitt at the Peacock stage at the Abbey Theatre.

– Spliced by Timmy Creed, The Half of It Productions

– The Half of It by Karen Cogan, MOMMO Theatre

– Everything I Do, One Two One Two Productions.

• Strategic conversation and feedback on next steps for the group

• Contracts in action: One to Ones clinics with Andrea Martin, partner, MediaLawyer Solicitors

• Taking Out A Tour workshop with Marie Tierney, Production Manager

2019 will provide further opportunities to the ELEVATOR participants to expand their networks, upskill, and develop their careers by continuing a programme of mentoring, strategic planning and training. For further information on this programme please contact Irish Theatre Insitute’s Programme Co-ordinator Leigh Hussey, lhussey@irishtheatreinstitute.ie