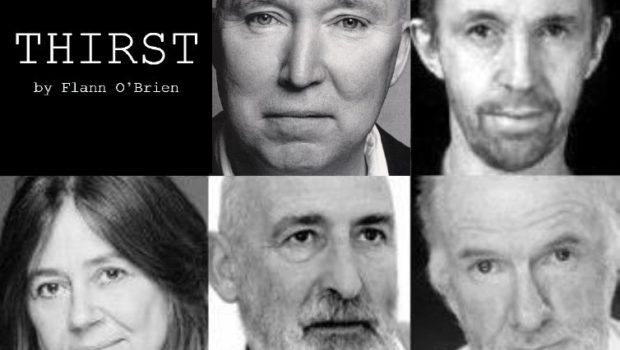 When a sergeant finds him serving after-hours, publican Ignatius Cornelius Coolahan regales his accuser with a protracted story of military service in the desert in the hope of tapping into his sense of thirst.

Flann O’Brien was the pseudonym of Brian O’Nolan (in Irish Brian Ó Nualláin). Born in Strabane, Co. Tyrone in 1911, he graduated from UCD before joining the Civil Service. His regular column in the Irish Times entitled “Cruiskeen Lawn” was written under the name Myles na gCopaleen. His Irish-language 11el An Béal Bocht was also published under the same name. 11els in English include At Swim-Two-Birds, The Third Policeman and The Dalkey Archive. His plays include Faustus Kelly, Thirst and The Insect Play. Plays published but not produced include The Knife, The Handsome Carvers and A Moving Tale: A Dublin Hallucination. Television plays include The Boy from Ballytearim, The Time Freddie Retired, Flight, The Man with Four Legs, The Dead Spit of Kelly, O’Dea’s Your Man, Episode One – The Meaning of Malt, Th’ Oul Lad of Kilsalaher, Episode One – Trouble about Names. He lived with his wife in Dublin until his death on April Fool’s Day, 1966.

PJ trained at the Oscar Theatre School of Acting. In 1988, he founded Dry Bread Theatre Company with Frank Boyle to focus on producing the works of Patrick Kavanagh, Flann O’Brien and Pat Tierney. He has performed the life and works of Patrick Kavanagh for 25 years, including Patrick Kavanagh A Life, (Bewley’s Café Theatre); and has toured extensively with Mouth on Fire’s production of Krapp’s Last Tape. His work for film includes Far and Away (1992), The Playboys (1992) and Moondance (1995). PJ is also a poet whose work has been broadcast on RTÉ.

Michael has appeared in many productions for the Irish Repertory Theatre Company, New York and played the title role in Hugh Leonard’s Da with the Irish Bronx Theatre Company. Other US appearances include The Playboy of the Western World with Steppenwolf Theatre Company and The Seafarer with Capital Repertory Theatre in Albany, New York. Michael co-founded Banba’s Crown Theatre Company and has recently performed in their co-production with Bewleys Café Theatre of Micheál Mac Liammóir’s The Importance of Being Oscar. His stage credits include Brian Friel’s The Home Place (Gate Theatre and London’s West End) and Dermot Bolger’s The Consequences of Lightning and The Townlands of Brazil (axis: Ballymun and The National Theatre Poland). Michael also works in television and radio.

Angela trained at the Abbey Theatre School of Acting and the Actors Institute London. Known best for the role of Mary in RTÉ’s Strumpet City, she has worked extensively in Ireland and the UK as an actress for film, television and stage. Notable credits include playing the lead roles in both Sheehy-Skeffington and The Plough and the Stars for the BBC. Her extensive stage credits include playing 07iet in Romeo & 07iet (The Studio Theatre, London) and Susie in Hugh Leonard’s Madigan’s Lock and Judith in Bernard Shaw’s The Devils Disciple (Abbey Theatre). Angela also played The Mother in The Happy Journey to Trenton and Camden (The Peacock Theatre) and Gertrude in Hamlet (The Tivoli Theatre).

Liam trained with John Breen in D.I.T Rathmines and at University College Dublin. He has toured internationally with Brokentalkers’ Silver Stars, was a participant in Theatre Forum’s Next Stage programme 2015 and previously has spent time directing community theatre in New Zealand. Recent theatre credits include Wide Open Opera’s Things We Throw Away; Louise White’s Mother You and The Bells of at Theatre Upstairs. Liam played Mr. Boaz in the Tom Hanks’ production of City Of Ember and John Daly in The Easter Seven (TG4) and was nominated as Best Actor in the LA Short Film Festival for Positive Discrimination (Dir. Charlo Johnson). Liam also appears in Dare To Be Wild, directed by Vivienne 12ourcy, to be released in 2016.

Helénè Montague was born in Sweden, home educated in west Cork and has worked in professional theatre in Dublin since she was 17. She was a founder member of Rough Magic Theatre Company and has worked as an actress and musician for theatre, TV, film and radio as well as many directing credits for theatre and opera. Helénè is the Music Theatre and Singing Tutor in Inchicore College of Further Education and, in the last 10 years has directed all the first year plays and co/directed all the third year expressionist productions. She also tutors at the Gaiety School of Acting and privately for singing and piano.

The readings will take place at the Lord Edward pub on