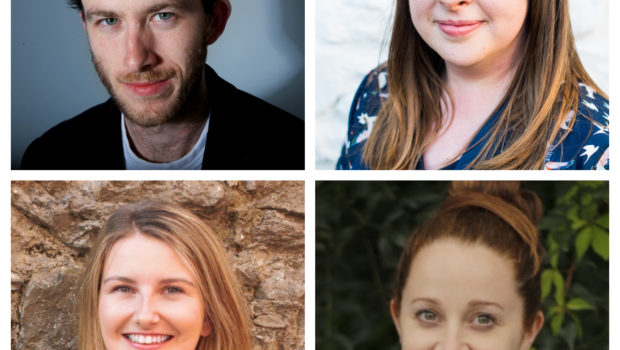 Irish Theatre Institute (ITI), in association with Town Hall TheatreGalway, is delighted to announce ELEVATOR 2018, a mentoring and resource sharing initiative. Following a call out last month to emerging producers based in the West of Ireland, four participants have been selected to take part in a 10-month programme. ELEVATOR aims to build confidence and know-how among emerging theatre professionals in the area of producing through peer-to-peer learning and an established framework of mentoring and supports.

Funded by the Arts Council’s Resource Sharing Scheme, ELEVATORis an opportunity to upskill emerging independent producers working in the Irish theatre sector through a curated mentoring programme with the intention of building an infrastructure of supports for artists and artistic creativity in the West of Ireland.

ELEVATOR aims to encourage East/West partnerships by providing mentoring, strategic planning, training, project development and networking opportunities for emerging independent theatre producers at a crucial point in their careers. This year ITI will continue its partnership with the Town Hall while also collaborating with other Galway-based organisations and bodies to collectively grow producing capacity in the lead-up to Galway 2020.

On announcing this year’s ELEVATOR participants Jane Daly, Co-Director of Irish Theatre Institute, and proud Galway resident said: “ITI is thrilled to have the opportunity to work with such an exciting and ambitious group of emerging producers with a view to collectively building creative producing capacity in Galway city in the lead-up to, and beyond, Galway 2020”.

Fergal McGrath, Manager of Town Hall Theatre said: “We at Town Hall Theatre are delighted to be part of this capacity building initiative and at such an exciting time for Galway. It is critically important that emerging producers here in Galway have the opportunity to develop sustainable careers and we look forward working with ITI on this and future developmental projects”.

This year’s ELEVATOR Producers are:

– Féilim O’hAoláin, production on Baoite, written and directed by Darach Mac Con Iomaire, a co-production between An Taibhdhearcand the Abbey Theatre premiering this July in association with Galway International Arts Festival;

– Jill Murray, producer with the newly formed theatre company Brú, whose inaugural production Cleite/Feather, premiered in Katie’s Cottage at Galway Theatre Festival in May this year;

– Síomha Nee, venue manager at The Mick Lally Theatre, where she was the in-house producer for the premiere of Radio Rosario written and performed by Little John Nee, the Branar Season and DruidSessions.

All four producers have identified independent artists/companies and projects which they will work with throughout the coming 10 months of the scheme. During this time, they will have access to designated desk space in Galway city centre, engage in workshops and training with key experts in the theatre and business sectors, as well as attend festivals and events to build a network of practitioners across the country. For information about the programme please see the ELEVATOR section of the website.

ITI are delighted to welcome Félim, Jill, Kate and Síomha to the programme and are looking forward to see them develop in the coming months.