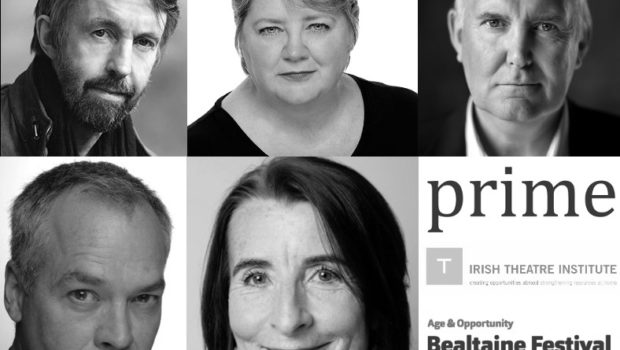 On Friday 19th 05, Irish Theatre Institute in association with Age & Opportunity / Bealtaine Festival launched prime continuing professional development programmes for actors aged 55 – 80 years old. Now in its 3rd year, prime 2017 offers professional actors the opportunity to reignite their creative dynamism, develop their ideas and build their skills in writing for theatre across four days of intensive workshops from 05 to August. Participants will work with dramaturg Hanna Slättne to assess their practice and learn valuable insights into the dramaturgical process. By the end of the programme, participants will have gained knowledge, practical experience and confidence in creating their own work.

prime, developed by Irish Theatre Institute, focuses on career sustainability, entrepreneurial skills, physical and mental health and well-being for professional actors. In an ageing society, one in which actors work well beyond the ‘normal’ retirement age, availing of supports and opportunities to manage ones career and develop your own projects is becoming a more pressing need. Working with passionate, established professionals, who proactively engage in ways to stimulate their careers, prime helps actors to stay connected and build new networks through interventions including workshops, masterclasses and sector engagements.

Hanna Slättne is the Director of New Work Development at Tinderbox Theatre Company where she runs the dramaturgy strand of the company’s activities: working with writers under commission, production dramaturgy and artist’s development programmes such as TAKE AWAY THEATRE and the STATE OF THE ARTS initiative; a series of dramaturgy led workshops for theatre makers. She works closely with Tinderbox’s participatory programme across their varied range of activities. Hanna has worked with most of the leading Northern Irish theatre companies as part of the Joint Sectoral Dramaturgy Initiative 2005- 2015 and regularly collaborates with the BBC and Northern Ireland Screen providing skills development for writers. Hanna is a founder member of The Dramaturgs’ Network UK and since 2015 is working with Pamela McQueen to launch the Dramaturgs’ Network Ireland. In 2016 Hanna won the Kenneth Tynan Award for excellence in dramaturgy.  She is the dramaturg on Reassembled Slightly Askew; a sonic arts and new writing, immersive experience which is currently touring.

Michael O’Sullivan’s recent theatre credits include a nationwide tour playing Donie in Jack Harte’s Language of the Mute. For Shiva Productions he played various roles in the three minute plays Nobody Smokes Anymore; The Cat and the Moon and The Deal (Dublin, Wicklow, London and Paris). Michael is cast in the second series of Bridget and Eamon (RTÉ). Michael trained at the Abbey Theatre and performances there include The Sh08hraun (Dir Garry Hynes) and Tagann Godot at the Peacock (Dir Tomás MacAnna). Performances with Druid include The Wood of The Whispering, Playboy of The Western World, Famine and A Touch of the Poet (Dir Garry Hynes) and There are Tragedies and Tragedies, The Ointment Blue and The Increased Difficulty of Concentration (Dir Maeliosa Stafford). With Aisling Ghéar he performed in Gruagairí (Dir Bríd Ní Gallchóir). Michael has also performed in theatres in New York, Toronto and the UK.

Mark Tankersley graduated from The 07liard School Drama Division, NYC. He subsequently acted almost exclusively in theatre with only some film and television for quite a few years in New York City, the New York region, Hawaii, Nashville and Colorado. Since his move to Ireland in 2004 the majority of his acting work has been in film and television, including Lockout, Sanctuary, An Klondike (season 2), Killinaskully and Fair City (RTÉ). Mark relishes the opportunities that he has had so far to act and direct for the theatre in Ireland. Mark is based in Co Meath.

Jack Walsh studied at the Ecole Internationale de Mimodrame de Paris, Marcel Marceau in mime, dramatic art, clowning, classical and modern dance, fencing and acrobatics, also working on object manipulation/ marionette with Nicolas Goeussef of the Philippe Genty company and with New York marrionettist Roman Paska. He has performed on almost every Irish stage and favourite roles include Michael Feeney in Arrah na Pogue at the Abbey Theatre, Gregor Samsa in Metamorphosis and the title role in Arturo Ui both at the Lyric Belfast, Bosola in Loose Canon’s The Duchess of Malfi, Shannon in Poor Superman both at Project Arts Centre, Pod in The Borrowers at the Helix, Dan Milligan in Puckoon at the Leicester Square Theatre and Irish tour. Other roles include Jake in a bilingual (Irish/English) version of Stones in His Pockets for Aisling Ghéar and the Swineherd in A Full Moon in March in the Yeats International Festival at the Peacock Theatre. He has toured Ireland four times with Guerilla Days in Ireland and also played in Barnstorm’s The Ice Child at the Watergate in Kilkenny. His work for screen includes Killinaskully, Penny Dreadful, Ripper Street, Moonfleet, Titanic – Blood and Steel, The Escapist, Fair City and Cumann Na mBan. He recently appeared as Tom Clarke in TG4’s Wrecking the Rising and as the Irish Theologian John Scottus in Vikings.

Irish Theatre Institute (ITI) is a lead national organisation in the provision of supports and resources to the Irish theatre sector. ITI nurtures, promotes and drives the ambition of Irish theatre makers and Irish theatre, from its grassroots beginnings to its presentation on the world stage. We seek to maximise creative opportunities and resources for performing artists and producers across theatre and dance in all Ireland and international context. Irish Theatre Institute provides mentoring, training and continuing professional development for theatre makers; from writers and performers to producers, directors, behind-the-scenes staff and company managers. ITI’s mission is to create opportunities abroad and strengthen resources at home for theatre artists, companies, venues and festivals.

Age & Opportunity is the national organisation that inspires everyone to reach their full potential as they age. We are continually finding new ways to engage, to motivate and to support people in this adventure. Established in 1996, Bealtaine Festival is an Age & Opportunity initiative part-funded by the Arts Council and delivered by hundreds of organisations around the country.  An estimated 120,000 people now take part in the Bealtaine Festival, making it one of Ireland’s biggest arts festivals. From dance to cinema, painting to theatre, Bealtaine showcases the talents and creativity of both first-time and professional older artists.