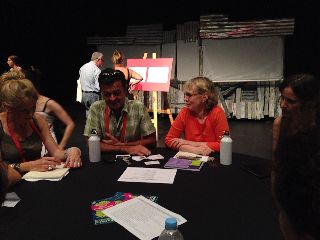 ITI has been invited to attend the biennial AUSTRALIAN PERFORMING ARTS MARKET which is taking place in Brisbane, 18 – 22 02. This is ITI’s fourth consecutive participation in this key international arts market. ITI’s Co-Director Siobhán Bourke, together with Pádraig Cusack of the National Theatre London, will co-host the Ireland/UK Theatre Session as part of the Exchange programme which offers delegates an opportunity to discover more about specifics regions, countries, networks and touring.

Since 1994 ITI has engaged in networking abroad and, in the past ten years, has focussed on a number of key international arts markets. These markets draw hundreds of performing arts presenters, producers and programmers from across the world together and provide the ideal environment in which ITI can promote the work of Irish theatre makers and production companies. APAM is just such a gathering and the Australian, New Zealand and Asian marketplaces offer myriad opportunities for Irish companies and artists.

ITI’s participation at APAM is supported by both Culture Ireland and Australia Council for the Arts/APAM.

More information on the event can be found here: