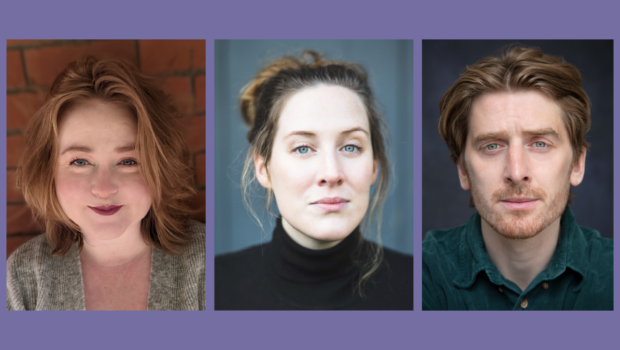 This award is named in honour of Phelim Donlon, former Drama Officer at the Arts Council and a dedicated member of ITI’s first PLAYOGRAPHYIreland Advisory Panel, in acknowledgement of his valued contribution to Irish theatre.

The recipient of the 2023 award will receive an ITI writer’s bursary of €2,000 and a two week fully-resourced residency in Tyrone Guthrie Centre, Annaghmakerrig. The recipient will be announced on Thursday 8th December. For the first time, we are announcing the shortlist- writers on the shortlist will receive €500.

Thank you to the artist panel for their time and generous consideration: Maisie Lee, Barry McGovern, and Elaine Murphy.

Please find biographies for the shortlisted writers and artist panel below.

Caitríona Daly is a playwright and screenwriter from Dublin. Previous works include: Duck Duck Goose (Winner, Writers Guild of Ireland Zebbie Award for Best Theatre Script 2021); Normal (nominated Fishamble New Writing Award 2017); and Test Dummy (nominated Irish Times Theatre Award for Best New Play 2016). She is currently under commission with the Abbey Theatre and is a writer for a continuing BBC Drama series.

Katie McCann is a writer and actor based in Dublin. She has written six plays to date, including her play Cirque des Rêves which was published by Stinging Fly Press in 2019. She wrote three episodes of the RTE and Tailored Films children’s show Ace My Space which aired in November 2020. In 2021 Katie was accepted onto the Bewley’s Cafe Theatre New Writing Venture Percolate which culminated in a rehearsed reading of her play, The Lamentable Tale of Darkey Kelly, at the Dublin Theatre Festival in 2022. She was also a recipient of the Actor as Creator Scheme from Bow Street and Screen Ireland which funded her first short film Darkey Kelly, which premiered at the Cork International Film Festival 2021.

Ian Toner’s debut as a playwright, Animalia, premiered at the Dublin Fringe 2016, winning the Fishamble New Writing award and the BBC Radio NI award, as well as being nominated for the Bewley’s Little Gem award and the Stewart Parker Trust Award. Other works include: The Snow Queen (Smock Alley 2016 Christmas Show), How to Build Your First Robot and Boyz of Harcourt Street (as a co-writer). He is currently a script writer for Fair City. As an actor, theatre credits include: Punk Rock (2015 Nominated Best Supporting Actor Irish Times Theatre Awards) and Double Cross (Lyric Theatre); Look Back in Anger, Romeo and Juliet, The Vortex (Gate Theatre); The Shitstorm (Peacock Theatre), Wild Sky (Bewley’s Cafe Theatre, national/international tour), At the Ford (The New Theatre/DTF).

Barry McGovern is an actor. Recent work includes reading Joyce’s Ulysses in its entirety at the Peacock Theatre over seven days in June and Eliot’s The Waste Land at the Yeats Summer School in Sligo in July—2022 being the centenary of the publication of these two modernist masterpieces. Earlier this year he toured with Deirdre Kinahan’s Halcyon Days. He has recently recorded Finnegans Wake for Naxos Audiobooks. He has also done a bit of Beckett.

Elaine Murphy‘s debut play, Little Gem, premiered at the Dublin Fringe Festival in 2008 to rave reviews. After transferring to the Traverse Theatre in Scotland, it was awarded the overall prize at the Edinburgh Fringe: The Carol Tambor Award. Her short play Ribbons followed at The Peacock Theatre with Shush premiering later the same year at The Abbey. Her radio play Ma won the PJ O’Connor Radio Drama Award from RTE and a Zebbie from the Irish Writers Guild. Maeve Binchy’s Circle of Friends was her first novel adaptation for the stage, premiering at The Gaiety Theatre, Dublin in 2022.  She is currently developing her first TV series.

Phelim began work at the Arts Council in 1983, and served as Film, Drama and Opera Officer, retiring in 2001. He was also Director of the Auditoria review of the built infrastructure for the performing arts throughout Ireland. In retirement, his commitment remained undiminished, and he served on the boards of many performing arts organisations. Learn more about Phelim and his impact here.

The Phelim Donlon Playwright’s Bursary & Residency is funded by the Arts Council /An Chomhairle Ealaíon.