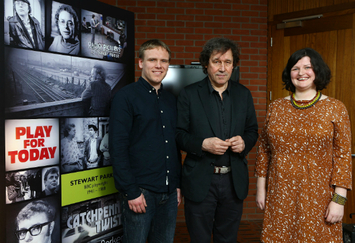 The 2013 Stewart Parker Trust awards were announced at the Lyric Theatre Belfast yesterday.

The joint winners of the Stewart Parker Trust Major Bursary for 2013 are Kate Heffernan for In Dog Years I’m Dead (Mirari Productions) and Genevieve Hulme-Beaman for Pondling (Ramblinman/Gúna Nua).

The winner Stewart Parker Trust/BBC Radio Drama Award is Mikel Murfi for The Man in the Woman’s Shoes.

The BBC Northern Ireland Irish Language Drama Award went to Macdara Ó Fatharta, whose most recent play An Tíoránach Drogallach, is an adaptation of Tom Murphy’s The Last Days of a Reluctant Tyrant produced by An Taibhdhearc and Galway Arts Festival.

The Stewart Parker Trust Shortlist for 2013 was:

Huge congratulations to the nominees and the winners!