THE WHEELCHAIR ON MY FACE WINS A FRINGE FIRST! 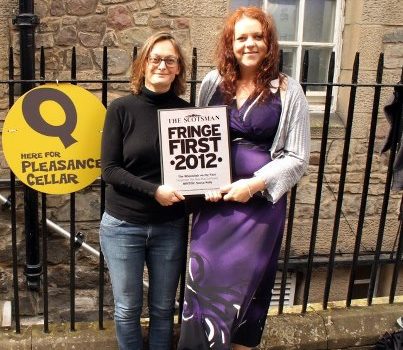 Fishamble: The New Play Company has been awarded a prestigious Scotsman Fringe First Award for The Wheelchair on My Face. The awards were announced on August 24th and some footage from the ceremony can be viewed here: http://bit.ly/PgMQWJ. The Wheelchair on My Face was written and performed by Sonya Kelly, directed by Gina Moxley and was originally produced in 2011 as part of the hugely successful Show in a Bag project.

Show in a Bag is an artist development initiative of Dublin Fringe Festival, Fishamble and ITI to resource theatre makers and actors. The aim of Show in a Bag is to facilitate the creation of new small scale, tourable shows that highlight the talents and skills of performers making work for ABSOLUT Fringe. This year’s participants in Show in a Bag are currently hard at work preparing for the forthcoming Fringe festival. More information about their shows can be viewed here: http://bit.ly/Pja8Rv.

The Wheelchair on my Face has toured extensively throughout 2012 but there are still opportunities to see the show. For further information about touring dates and to book tickets click here: http://fishamble.com/upcoming-productions.

Congratulations to Sonya, Gina and all at Fishamble on this wonderful achievement.