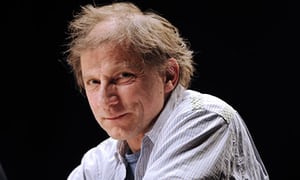 World Theatre Day was created by the International Theatre Instituteand  celebrated for the first time on 27th March 1962, the date of the opening of the “Theatre of Nations” season in Paris. Ever since, each year on that date, World Theatre Day is celebrated on a global scale.

To celebrate the 70th Anniversary of the establishment of the International Theatre Institute and to underline the cross-cultural and international aspect of theatre and of ITI, the Executive Council has selected five message authors to write a message – one from each of the five UNESCO Regions: Africa, the Americas, Arab Countries, Asia Pacific and Europe. The UK’s Simon McBurney was selected to write the European Message.

“Half a mile from the Cyrenaican coast in Northern Libya is a vast rock shelter. 80 metres wide and 20 high. In the local dialect it is called the Hauh Fteah. In 1951 Carbon dating analysis showed an uninterrupted human occupation of at least 100,000 years. Amongst the artefacts unearthed was a bone flute dated to anywhere between 40 and 70,000 years ago.
As a boy when I heard this I asked my father “They had music?”
He smiled at me.
“As all human communities.”

He was an American born prehistorian, the first to dig the Hauh Fteah in Cyrenaica.

I am very honoured and happy to be the European representative at this year’s World Theatre Day.

In 1963, my predecessor, the great Arthur Miller said as the threat of nuclear war lay heavy over the world: ’When asked to write In a time when diplomacy and politics have such terribly short and feeble arms, the delicate but sometimes lengthy reach of art must bear the burden of holding together the human community.’

The meaning of the word Drama derives from the Greek “dran” which means “to do” … and the word theatre originates from the Greek, “Theatron”, literally meaning the “seeing place”. A place not only where we look, but where we see, we get, we understand. 2400 years ago Polykleitos the younger designed the great theatre of Epidaurus. Seating up to 14,000 people the astonishing acoustics of this open-air space are miraculous. A match lit in the centre of the stage, can be heard in all 14,000 seats. As was usual for Greek theatres, when you gazed at the actors, you would also see past to the landscape beyond. This not only assembled several places at once, the community, the theatre and the natural world, but also brought together all times. As the play evoked past myths in present time, you could look over the stage to what would be your ultimate future. Nature.

One of most remarkable revelations of the reconstruction of Shakespeare’s Globe in London is also to do with what you see. This revelation is to do with light. Both stage and auditorium are equally illuminated. Performers and public can see each one another. Always. Everywhere you look are people. And one of the consequences is that we are reminded that the great soliloquies of, say, Hamlet or Macbeth were not merely private meditations, but public debates.

We live in a time when it is hard to see clearly. We are surrounded by more fiction than at any other time in history or prehistory. Any ‘fact’ can be challenged, any anecdote can have claim on our attention as ‘truth’. One fiction in particular surrounds us continually. The one that seeks to divide us. From the truth. And from each one another. That we are separate. Peoples from people. Women from men. Human beings from nature.

But just as we live in a time of division, and fragmentation, we also live in a time of immense movement. More than at any other time in history, people are on the move; frequently fleeing; walking, swimming if need be, migrating; all over the world. And this is only just beginning. The response, as we know, has been to close borders. Build walls. Shut out. Isolate. We live in a world order that is tyrannical, where indifference is the currency and hope a contraband cargo. And part of this tyranny is the controlling not only of space, but also time. The time we live in eschews the present. It concentrates on the recent past and near future. I do not have that. I will buy this.

Now I have bought it, I need to have the next… thing. The deep past is obliterated. The future of no consequence.

There are many who say that theatre will not or cannot change any of this. But theatre will not go away. Because theatre is a site, I am tempted to say a refuge. Where people congregate and instantly form communities. As we have always done. All theatres are the size of the first human communities from 50 souls to 14,000. From a nomadic caravan to a third of ancient Athens. And because theatre only exists in the present, it also challenges this disastrous view of time. The present moment is always theatre’s subject. Its meanings are constructed in a communal act between performer and public. Not only here, but now. Without the act of the performer the audience could not believe. Without the belief of the audience the performance would not be complete. We laugh at the same moment. We are moved. We gasp or are shocked into silence. And at that moment through drama we discover that most profound truth: that what we thought the most private division between us, the boundary of our own individual consciousness, is also without frontier. It is something we share.

And they cannot stop us. Each night we will reappear. Every night the actors and audience will reassemble. and the same drama will be re-enacted. Because, as the writer John Berger says “Deep within the nature of theatre is a sense of ritual return”, which is why it has always been the art form of the dispossessed, which, because of this dismantling of our world, is what we all are. Wherever there are performers and audiences stories will be enacted which cannot be told anywhere else, whether in the opera houses and theatres of our great cities, or the camps sheltering migrants and refugees in Northern Libya and all over the world. We will always be bound together, communally, in this re-enactment.

And if we were in Epidauros we could look up and see how we share this with a larger landscape. That we are always part of nature and we cannot escape it just as we cannot escape the planet. If we were in the Globe we would see how apparently private questions are posed for us all. And if we were to hold the Cyrenaican flute from 40,000 years ago, we would understand the past and the present here are indivisible, and the chain of human community can never be broken by the tyrants and demagogues”.