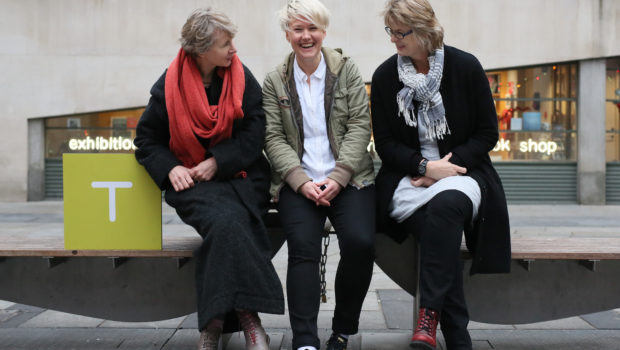 Irish Theatre Institute and  Tyrone Guthrerie Centre, Annaghmakerrig are delighted to announce that playwright and actor Amy Conroy has been awarded the 2017/18 Phelim Donlon Playwright’s Bursary and Residency.

The purpose of the Phelim Donlon Playwright’s Bursary and Residency is to provide writers like Amy with the time, physical resources and mentoring necessary to support the writing of a new play.  The award includes the ITI writer’s bursary of €1,000 and a two week fully resourced residency in Annaghmakerrig to take place between January and June 2018.  The previous recipients of the award are Fiona Doyle (2015/16) and Dylan Coburn Gray (2016/17).

Amy, who is Artistic Director of HotForTheatre, was selected from a short list of 10 playwrights by a panel which included Siobhán Bourke (Irish Theatre Institute), Dr Pat Donlon and playwright and director Martin Murphy. She is the author of several much loved plays including, I ♥ Alice ♥ I, Eternal Rising of the Sun, Break and Luck Just Kissed You Hello. Amy recently performed in Futureproof, at Cork Midsummer and Dublin Fringe Festivals and Martin Sharry’s Playboyz in Dublin Theatre Festival 2017. She recently directed Me Sara (Priming the Canon) for the Abbey Theatre, which played in the Peacock and toured nationally.

I’m really thrilled to be awarded the Phelim Donlon Bursary, it’s a hugely appreciated and a valuable endorsement for me as a playwright, and it has come at just the right time. I’m looking forward to the freedom and space it offers to write without self-editing or the pressure of a looming production. Amy Conroy

On making the announcement Siobhán Bourke, Co-Director or Irish Theatre Institute said On behalf of ITI and Tyrone Guthrie Centre I would like to congratulate Amy on being awarded  the third  Phelim Donlon  Bursary.  Amy is an immensely creative writer with a number of high profile plays and productions behind her and  the Award  will afford Amy some time to reflect and grow as a playwright.  We believe the combination of a two week residency in Annaghmakerrig and a small bursary should enable Amy to stretch her writing practice and develop new work.

Amy Conroy is an actor, playwright, theatre maker and Artistic Director of HotForTheatre. Her first radio play, Hold This, was recorded and broadcast on RTÉ Radio One in September 2010. Her first stage play, I ♥ Alice ♥ I, won the Fishamble Award for New Writing in the 2010 Dublin Fringe Festival and has enjoyed sold out runs in the Ulster Bank Dublin Theatre Festival, the Peacock stage of the Abbey Theatre Dublin, the Irish Arts Center, New York, Lókal Festival in Iceland, Glasgay Festival in Glasgow, The World Theatre Festival in Brisbane, Australia, Auckland Arts Festival in New Zealand, Ten Days on the Island Festival in Tasmania, Queer Theatre Festival Croatia, Centre Culturel Irlandais in Paris and The Lyric Theatre Belfast. It was broadcast on RTE Radio One, has been translated and performed in Poland, Italy and Iceland and is published by Oberon.

Her second show, Eternal Rising of the Sun, won the Best Female Performer Award when it premiered at Dublin Fringe Festival 2011. Her performance as Gina Devine also earned her a nomination for Best Actress in the Irish Times Theatre Awards 2011. Eternal Rising of the Sun has enjoyed successful runs in the Dublin Theatre Festival 2012, Fringe World in Perth, Australia, and a staged reading in Sydney Theatre Company. In September 2013, Amy and her company HotForTheatre presented Break, which combined spoken word, music and text. Luck Just Kissed You Hello premiered at the Mick Lally Theatre as part of the Galway International Arts Festival 2015, before a sell-out run for Dublin Theatre Festival later the same year, and was nominated for Best New Play in the Irish Times Theatre Awards 2016 and toured nationally. Amy has performed most recently in a critically acclaimed production of The Taming of the Shrew at the Globe Theatre, London, directed by Caroline Byrne (2016), Futureproof, directed by Tom Creed and Martin Sharry’s Playboyz in Dublin Theatre Festival 2017. She recently directed Me Sara (Priming the Canon) for the Abbey Theatre, which played in the Peacock and toured nationally.

Amy is an ITI Six in the Attic alumni and is currently writer in residence with Rough Magic Theatre Company.

Orlaith McBride, Director of the Arts Council, said : “Phelim’s commitment to the arts in general and drama specifically was absolute. He was a passionate advocate for new and emerging talent, and did as much as anyone in the Arts Council’s history to develop professional theatre in Ireland.”

The overarching policy principle of the Tyrone Guthrie Centre (TGC) is to provide the conditions in which artists can focus exclusively and for extended periods on the creation and development of their work.